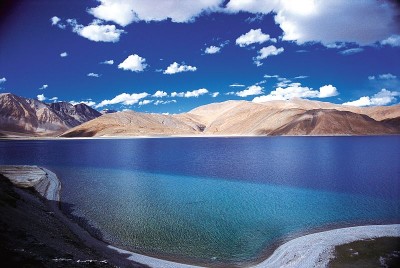 Do you remember the last scene of 3 idiots? Want to know about the location where Aamir Khan and Kareena Kapoor were snogging in the last scene? For those who are besotted by the background that acted as a catalyst for Kareena Kapoor’s love confession, the place is located in Ladakh. Situated at a height of 4,250 meters, far away in barren land in Ladakh, Pangong Tso is one of the largest brackish lakes in Asia. The crystal clear blue lake sprawls over an area of 100 kilometers across the borders of two countries in India and China. It is one of the charismatic lakes situated on the Changtang plateau in eastern Ladakh region.

Pangong Lake is also known by the name of Hollow Lake and appears as a clear symbol of nature craftsmanship. The brackish water plays with sunlight to produce different effects of light. One-third part of the lake lies in India while the remaining two-third lies in Tibet, a region controlled by China. A large chunk of streams that fill the lake are located on the Tibetan part. The lake is located just 5 hours drive from Leh in the Ladakh region of Jammu & Kashmir.

The first glimpse of the tranquil, azure blue waters and shaky lakeshore remains etched in the memory of tourists. This area falls under army control and requires pass from deputy commissioner of Leh. During the winter season, the lake and its surroundings are engulfed by freezing temperature. The surface of the lake becomes so solid that one can’t walk over it. On the surface of frozen lake a gala festival of ice skating is organized. It calls on large number of skiers and ice skaters from several parts of the world. During this festival, tourists also get to see the local culture of the native people.

The route passes through beautiful Ladakh countryside, over Chang La, the third highest motorable mountain pass in the world. Traces of snow along the road welcome us. One can cross the valley on sinking road. The mountains in the backdrop appeared to be painted in the colors of green, brown and violet. There is a mountaineering school, which imparts training in various degrees of rock climbing.

No inner line permit required for Indian nationalities/ tourist to visit Pangong lake. People of foreign nationality must have group permits (for a minimum of 3 people) accompanied by an accredited guide. The permit is issued by a tourist office in Leh for a small fee.

For those who are looking forward to stay close to the lake, tents are the only option. There is a limited choice to stay around and near Pangong Tso. Located in close proximity to Pangong Tso, Lukung offers camping facilities in Eco huts. Basic accommodation is available in Spangmik, the only hotel offering luxury tents as well as rooms. The local households also offer accommodation but most of them have shared toilets or toilets outside the house.

Just like accommodation, the options for eatery are also limited. It is always best to carry your own food stock. Although there are some eateries but the fare they offer is quite inexpensive. However, locals do provide home cooked food which is generally of good quality.